Climate change and effects on the forest ecosystem

Climate change will lead to more extreme weather and forest damage, and in this century will significantly change Norwegian boreal forests. Greater diversity of trees and other organisms can make the boreal forest more robust and resistant to changes.

This is the key message in a knowledge summary made by the Scientific Committee for Food and Environment (VKM) for the Norwegian Environment Agency.

Most of the forest in Norway is part of the coniferous forest belt that stretches from Fennoscandia through Siberia, Alaska, and Canada. These forests are shaped by the boreal climate zone in which they grow. Boreal forest covers almost 40 per cent of the Norwegian land area. 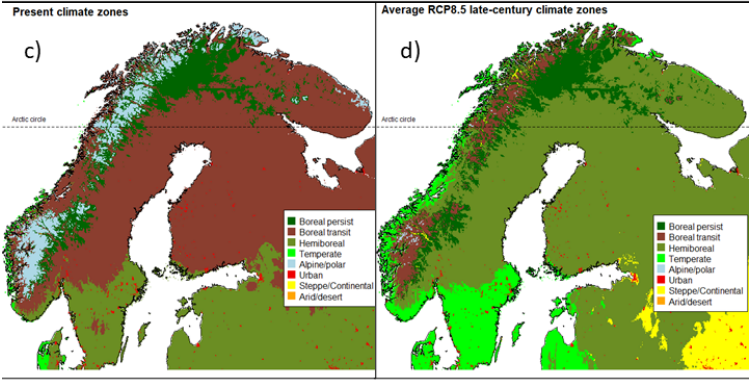 VKM has assessed and summarized knowledge about how climate change will affect the ecological state of Norwegian forests, and whether there are factors that make the ecosystem more vulnerable or more resistant to climate change.

The summary is based on a comprehensive review of scientific studies and covers most aspects of the structure of the forest ecosystem, including biodiversity, and function, such as carbon storage.

VKM has summarized the effects of changes caused by climate, and not by other human activity.

"Based on the knowledge we have today, Norwegian forests will be moderately to heavily affected by climate change from now towards the end of the century. The degree of impact depends on whether greenhouse gas emissions continue to increase, stabilise, or decrease over the next decades," explains Kyrre Kausrud, scientific leader for the project.

Spruce, for example, can benefit from a prolonged growing season and increased precipitation. At the same time, it appears to be particularly vulnerable to climate impacts. Spruce tolerates droughts and heat waves poorly and is susceptible to several insects and fungal diseases, all of which are likely to increase in scope with higher temperatures.

"We must therefore expect an increase in damage to Norwegian forest trees, especially spruce, as we have already seen in some spruce forests on the European continent. Insect infestations and various diseases will probably cause the most death for established trees. There will also be a risk of more forest fires and storm felling," says Kausrud.

It is likely that climate change will impair the forest ecosystem's ability to store carbon, since degradation of organic matter found in the soil in boreal forests will accelerate when the climate is warmer.

"Carbon loss can be reversed over the years, but in the meantime, it is a problem that higher temperatures lead to increased release of greenhouse gases, and that our most prevalent tree species are vulnerable to a warming climate.

"In the long term, from 2040-2060 until 2100, the negative effects will become more dominant. This especially applies to the effects of extreme weather and damage," says Kausrud.

Kausrud emphasises that there is considerable uncertainty about the conclusions.

"Climate warming is taking place more quickly and on a larger scale than we have seen before. Therefore, the basis for comparison is absent, and predictions of how complex ecosystems will behave are similarly uncertain. If the changes continue at a moderately bleak pace, in 40 to 80 years most Norwegian forests will no longer be in the boreal climatic zone. It is difficult to imagine what will happen when such large areas transition into a new vegetation-climactic zone during the lifetime of trees," continues Kausrud.

VKM points out that variety and diversity at all trophic levels can help make the forest more robust. This means having many different species of trees and other plants, fungi and insects, herbivores, and carnivores, and that the forest has trees of different ages.

“Dense, uniform forests appear to be more vulnerable to extreme weather and damage than forests with a great diversity of trees and organisms. Greater biodiversity leads to increased resilience and reduced vulnerability of the forest,” says Kausrud.

"Climate changes mean that many species will eventually be outside the areas where they can survive. They can weaken and die out, and biological diversity may be lost. At the same time, areas that were previously too cold for these species will now be warm enough. However, it is not a given that the species will manage to spread there and establish themselves on their own. On the other hand, this opens for management strategies that are worth exploring,” Kausrud concludes.

VKM's scientific panel Alien Organisms and Trade in Endangered Species is responsible for the report.

The Norwegian Scientific Committee for Food and Environment